The motto for Titanium Construction Services is straightforward: “Companies don’t build, people do.” One of the key people at the company who is living proof of this truth is Joseph Senna, CFO/project executive. When Senna joined the firm in 2006, he had an almost immediate impact on Titanium’s growth, its client portfolio and its depth of services.

Though Senna wasn’t always in construction, the close to 20 years he spent in an increasingly successful career in finance – one he left while at his peak – groomed him well for the transition. “I joined Titanium as chief financial officer. I was able to take the best of both worlds and make it all work,” he said.

Soon after graduating from Fordham University (’87) with a major in finance and a minor in computer science and obtaining a pair of NASD licenses, Senna was hired by Gotham Trading. He mastered the intricacies of the financial market quickly and found himself recruited by larger financial institutions. Several vertical moves later, he landed at Stafford Trading, where he created a specialized trading division, Eclipse JV. Subsequently, TD Securities acquired Eclipse JV and appointed Senna vice president, Equity Derivatives Group.

When Senna saw the opportunity at Titanium, he didn’t hesitate and fast became an integral member of the team. “I’ve always been fascinated by the science behind construction, so coming on board here was a no-brainer,” Senna said. Not entirely surprising for someone who had made it his life’s work to construct complex financial instruments and products.

In his new position, Senna drew on his finance experience to streamline the firm’s general and project specific accounting practices. As a result, Titanium’s project managers and superintendents are now able to focus more on the field and less on paperwork. “The people who build the jobs need to concentrate just on that, only then will a client be 100% satisfied,” said Senna.

His finance expertise is also a great boon during the estimating process. Before an estimate is submitted to a client, it makes one final stop -Senna’s desk. With a talent for pinpointing cost-saving opportunities and a keen attention to detail, he analyzes all project estimates to highlight ways to budget that will not compromise a project’s overall design intent or aesthetic. Furthermore, he has been instrumental in securing multi-million dollar insurance policies that have enabled Titanium to bid on some of New York’s more involved and elaborate projects. In one instance, his ability to secure $50 million worth of coverage for a high-profile job led directly to Titanium being awarded the project.

Titanium founder and principal Anthony O’Donnell recognized quickly that the skills and talents of his longtime colleague made him an invaluable asset to the firm. Senna was soon assigned to the most complex and prestigious projects starting with Chelsea Stratus and 25 Broad St. Both were for LCOR, a leading fully integrated real estate company specializing in property investment, management and development. “Joseph’s presence, his keen eye for the final finishes and ability to motivate the trades made all the difference,” said O’Donnell.

At Chelsea Stratus, Senna oversaw the most crucial stage of the project – the final punch list. An upscale, full-service, 37-story condominium in the heart of Chelsea, the building has 199 units that feature nine-and-half feet ceiling heights, state-of-the-art kitchens and luxury bathrooms boasting colored glass, stone and premium fixtures throughout. During the critical pre-turnover stage, Senna took the time to meet with each unit’s owner to review and quickly remedy any concerns. The project’s resounding success led LCOR to award Titanium the coveted 25 Broad St. project.

LCOR tasked Titanium with converting 25 Broad St., a commercial high-rise that sits adjacent to the New York Stock Exchange (NYSE), into a 308-unit luxury rental residential property after the 2008 financial crises sidelined the original developer’s plans. Titanium had to overcome many hurdles to bring LCOR’s vision to life, yet challenges are Senna’s cue.

Recently certified in mold remediation, Senna put his training to use when he oversaw the remediation of numerous areas affected by years of water damage at 25 Broad St. He then supervised the carefully planned demolition of the building’s South Wing, which required close coordination with local business and various federal, state and municipal authorities. The work was “capped” when Senna spearheaded the construction of 25 Broad’s opulent rooftop, a serene tenant environment featuring a stainless steel outdoor kitchen, scenic landscaped enclaves, a BBQ area and numerous plush seating arrangements. “Senna understood the roof top’s importance and its potential to be the building’s crowning glory – to that point, he worked to ensure the final product exceeded everyone’s expectations,” said Stephen Martinelli, project executive, LCOR.

Senna devotes his slim amount of spare time volunteering for the Staten Island Gunners Sandy Disaster Relief Fund where he uses his certification in mold remediation to renovate Staten Island homes devastated by Hurricane Sandy. He is also an avid supporter of Michael’s Fund; an organization dedicated to raising awareness of Duchenne Muscular Dystrophy.

Does he ever second-guess his midlife career change? Simply stated: No. The move was seamless for Senna. “There’s something to be said for the excitement of ‘Wall Street’ – but for me there is no feeling more rewarding than turning over an impeccably built project, seeing the expression on the client’s face and being able to say to yourself – ‘you nailed it’!” 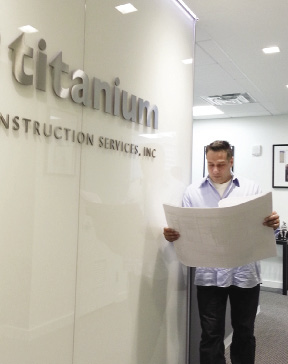